This is the oldest craft brewery in the state,opening in 1990. It was modeled after an English Pub. It is a series of several connected rooms,wood-paneled and rather dark. Just the right atmosphere for sipping ESB and single malts,not so much for picture-taking. 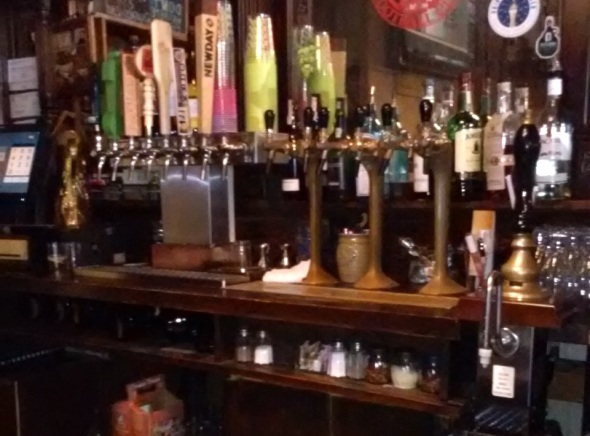 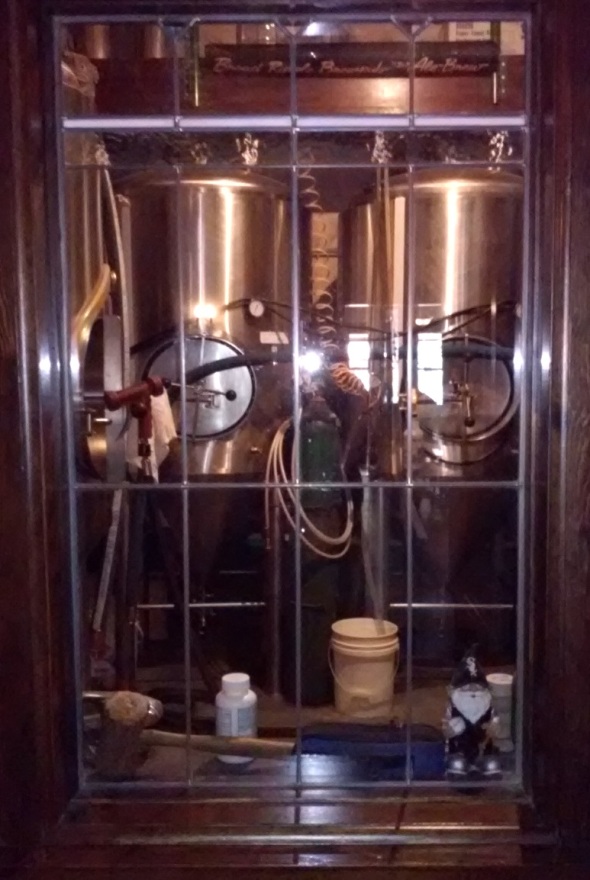 Pat and I have both been here before. I just never felt compelled to write about it because;frankly I thought the joint was a bit boring. Not bad just not too interesting. Well they have changed their menu and have added a couple of new and exciting brews so I thought today would be a good day to review the Papa of Hoosier brewing. They have always had a good selection of vegetarian dishes and with the new menu they offer even more. The also added a cheese curd appetizer for $8.75.

These were just plain good. A nice size with just the slightest outside crunch to offset the mozzarella cheesiness inside. I think these are possibly the best in town.

Pat ordered a Pub BLT for $7.95. You could get it with Applewood smoked bacon or veggie coconut “bacon”. For 2 bucks you can add Braunschweiger as well.

I was intrigued by the Thai spiced Pork sandwich,for $10.

Sound really great doesn’t? Unfortunately it reads better than it eats. The bread was hard,the meat was dry and offered little flavor. If they were trying to offer a version of a Bahn mi I can think of a few ways they could have pulled it off better. I also decided on a side of onion rings which were okay. Thin slices of onion simply coated and fried. Nice but nothing to shout about. 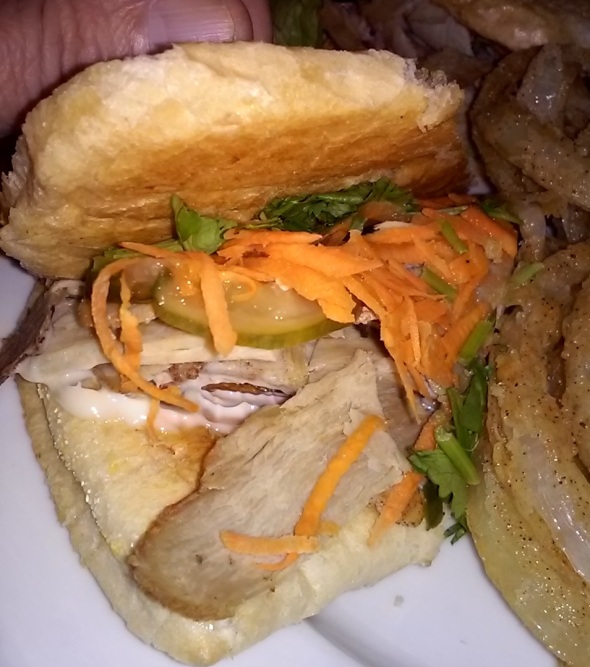 The beers were great. The stars of the line were two cask ales. A red and an ESB. Both were very drinkable. Pat tried a mix of the two. Pretty tasty. If you are a beer drinking vegetarian this may be the place for you. They have a nice new menu on their website so one bad sandwich won’t deter me from going back.

My first-born son and I decided to recognize his Birthday with lunch; rather than dinner. Initially it was to be Saturday dinner but he got some tickets to the National Drag Races. No father can compete with a dragster. So we decided on MacNiven’s; a Scottish American Tavern, since neither one of us had ever been there before. Frankly I was looking forward to trying their version of Haggis. I had also had read good reviews of their burgers. They take 8 ounces of Angus beef, shape it into a über thin patty 6 to 8 inches in diameter, soak it over night in Worcestershire and cook it on a flat top and serve it on a toasted bun with the usual garden. They also offer a nice selection of house cooked beef selections.

In addition to a Haggis entree they also offer it as an appetizer. That is the first thing I ordered. Along with a Tennents. A Scottish brewed Lager I have never tried before. Unfortunately Adam has had haggis before and did not like it. So I was forced to go it alone. I must tell you I found it to be excellent. Rich and meaty with a great texture. Easily spread on the little pieces of rye bread over a nice foundation of whipped butter. The bread was the weak link. Dry and a trifle generic for such a spread. Akin to serving caviar on a Ritz. Of course I am not sure if I can think of an alternative to keep the same price point. As far as the Tennents beer is concerned it is a great beer with food. An ABV of 4 and a sublime taste perfect to have with a meal. 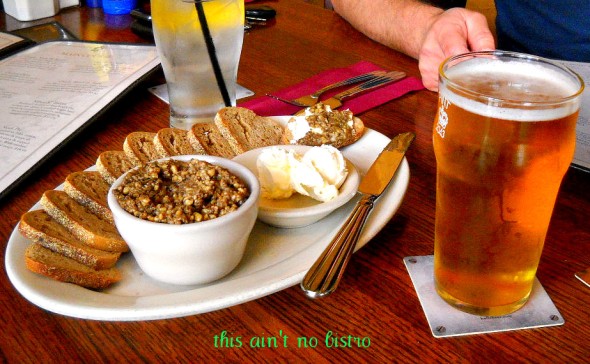 As for my entre I opted for a burger. Unfortunately I was underwhelmed. Being a big fan of Worcestershire sauce I was rather disappointed in the flavor. Or lack there of. I think it was because the patty had sort of flat top steam cooking thing going on. It definitely could have benefited from a little carmelization and crunch. For all their sandwiches or Baps as they call them they offer a large variety of sides. I tried a cup of Vegetarian Chili. It was surprisingly tasty, I say surprisingly only because I think of Vegetarian Chili as an oxymoron. This, however had a good Southwest background and was loaded with various beans. Plump Butter Beans ( my favorite) included. 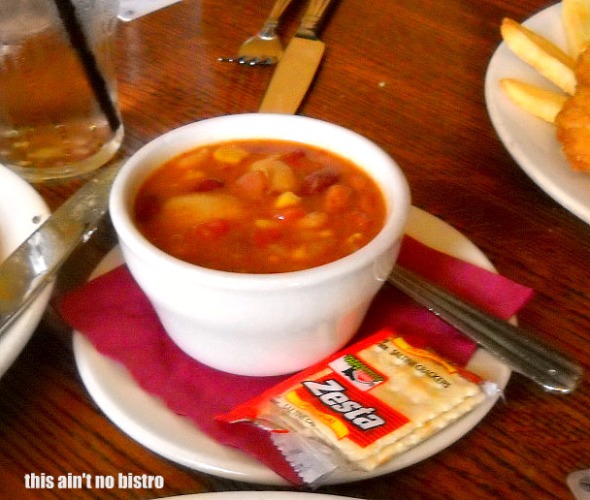 Naturally I ended up taking half of my food home. From the beginning I wanted to keep room for desert, somehow that never works out. They have a bread pudding with raisins soaked in 18-year-old Glenlivet over night and topped with vanilla ice cream and caramel syrup. Well, not today. But someday; someday I shall have that desert. Before I forget I wish to thank Julie, our, server. She might have been new but she did a great job.