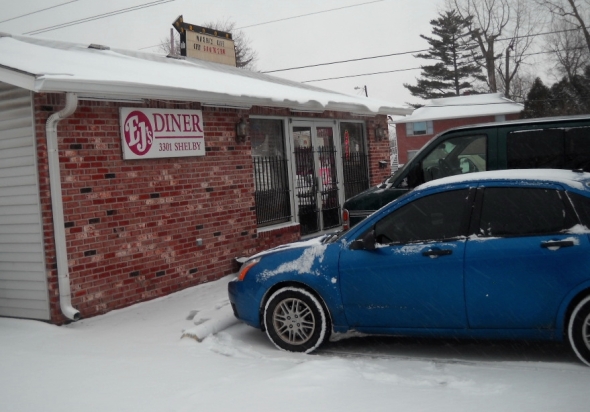 Shelby Street is like a lot of streets in a lot of cities. A street that serves several small businesses and several older homes in various states. Some that show their age and others that seem ageless. In other words a working class neighborhood. Invariably such streets lead to a more hip destination. In this case Fountain Square. The intersection of Shelby and Virginia Avenue. This whole area has a bunch of really nice joints. And its share of non-fancy joints. The kind that the cool kids don’t go to. Pat and I try to hit both sides of the street. The hip, and the not so hip.

We are admitted cheer leaders for the Mom & Pop joint. The joints that never get the publicity or fanfare that some joints enjoy. Sometimes it is deserved and sometimes it is an oversight.

I think EJ’S fits the latter; more than the former. Originally it was called Ma & Pa’s Cafe. You can see that on the menu and as well as the house car.

Thursday was a typical Indiana day in January. Snowy, cold and icy. The sort of day that makes you wish your ancestors had settled farther South. So both of their specials hit home. Ham and beans and cornbread, or pot roast. I felt some lovin’ from the oven so I ordered Pot Roast.

My plate came out sporting more of a beef stew look. Nice chunks of beef, carrot and potato in a rich brown gravy. They even threw in a monkey dish of green beans. It seems that they use a chuck roast, and stewed  or braised it down slowly, gently and long. It was so tender you could eat it with a spoon. The ‘taters and carrot were equally nice. The beans were Ho Hum. But I got some bread and butter to sop up the sauce. It wasn’t haute’ cuisine, but it was very tasty, and filling and only $5.25.

Pat passed on the special and opted for a double cheese burger with a baked potato. For $4.99. 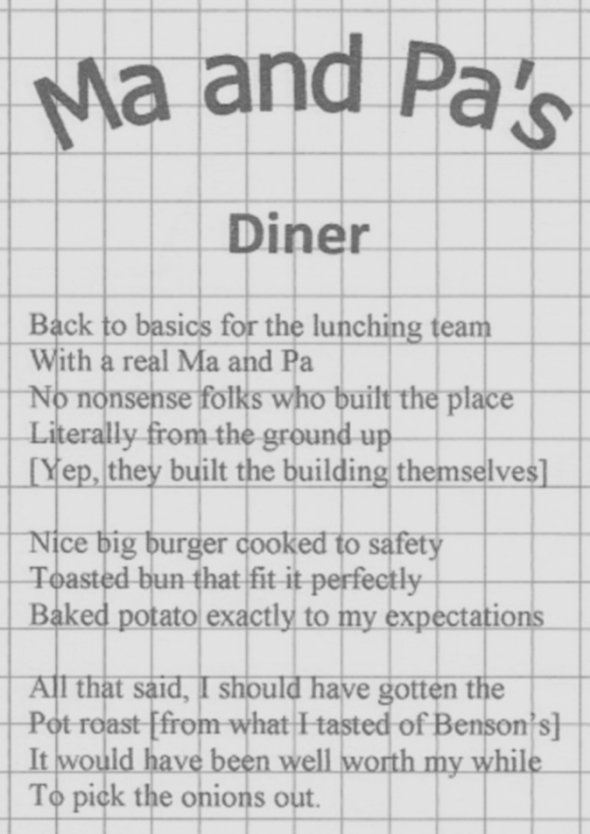 I put the scans of the menu on the Urbanspoon page for EJ’S Diner. It is small and pretty straight forward. It is opened from 6 AM to 2 PM so you can get breakfast all day. They offer scratch made lunch specials and soups and the prices are definitely right. So if you’re hungry for down home cooking you know where you can go.