In 2016 after a 15 year run the Talbot Street Night Club closed. Well now the site is home to Baby’s. A colorful little joint that is a lot of fun. Since the old Talbot had regular drag shows the owners of Baby’s wanted to celebrate its past by using color and sparkle. When I first read that in a local column I did not know what to expect. It could have easily come across as more parody than homage. But they did it right.

They also have a very nice outdoor seating area with infra heaters in the ceiling. A reminder that Summer may be over but we will still have several days left before sub zero temps.

One thing I don’t understand is why they call themselves a Diner. They have a small menu featuring smashed burgers and broasted chicken with a few side dishes. They also have a selection of Milk Shakes, some spiked with alcohol. I would like to show the menu but I seem to have mislaid the link. It is out there somewhere because I saw it. I found it. http://babysindy.com/

They offer their chicken as a whole bird for $24, half chicken for $12 and 2 piece white or dark for $7. I was more in a beef mood so I ordered their House Strut burger. That would be a double smashed burger with bacon, gouda and mango chutney as well as a special sauce priced at $12.

I enjoyed my burger very much, it had a lot going on. The creamy cheese and smoky bacon brought one taste to the party the spicy sweetness of the chutney another and the whole thing was unified by the hamburger lace of the smash burger. Very good burger. But it may have gone one sauce too far. The special sauce got kind of lost in all the tastes.

It is really good to see the Old North Side being rejuvenated. It is pretty close to me so I will be coming back. I want to try some chicken and a spiked milk shake.

After going to more contemporary joints the last couple of weeks I thought we needed a change. We needed to go back to our roots. So we decided to visit a local legend. The Working Man’s Friend. Pat and I have both been here several times but this is the first time we visited together. Sometimes we forget that the older joints have as much to offer a community as the newer more trendy spots. This place opened in 1918 as a lunch counter built by an immigrant from Macedonia named Louie Stamatkin. We met the third generation owner; Becky, and she has as clear a business perspective as her ancestor. She showed us a copy of the history of the joint, the short version;but I didn’t bring my scanner so I had to rely on the phone camera. 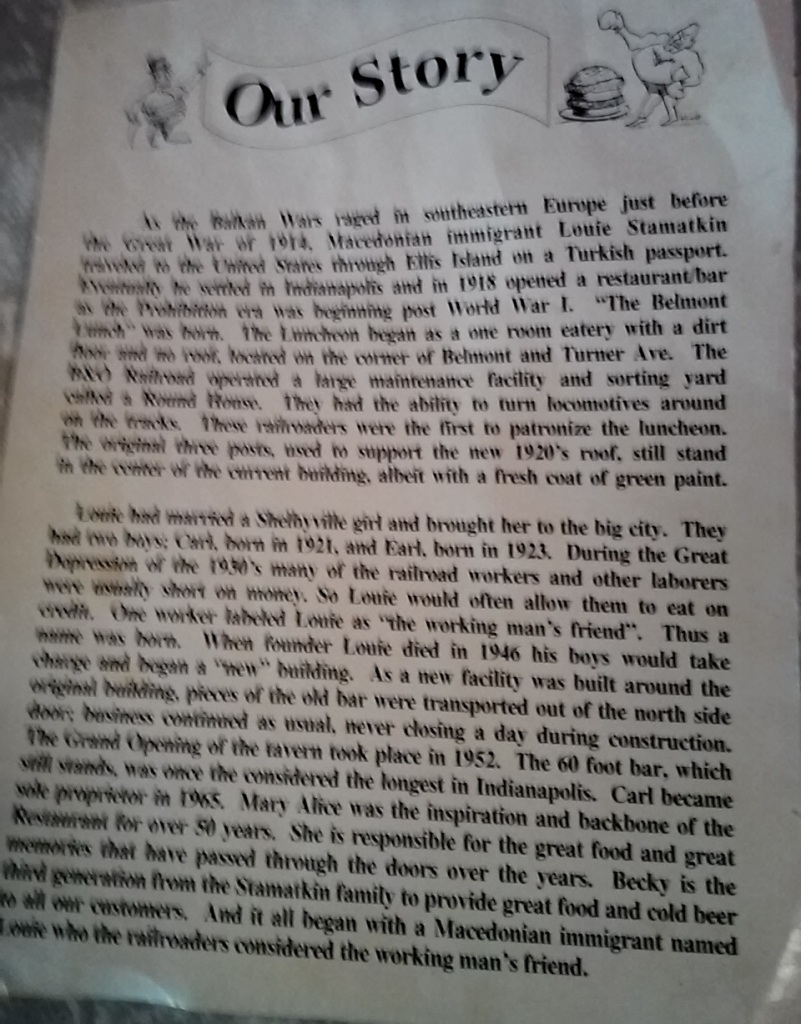 I apologize for the poor copy. I was unable to find an alternate source so this is all I am able to give.

The place offers several tables and a 60 foot long bar. A bar that was the longest in Indianapolis when it was built in 1952. Since their menu is limited they rely on 2 signs to tell the clientele. A small one on a side wall.

And a more extensive sigh behind the bar.

As a bar they do offer the basic liquors and bottled beer. As for their drafts they only offer Bud and Bud Light. Of course they do sell a 32 ounce frosted goblet for about 5 bucks. 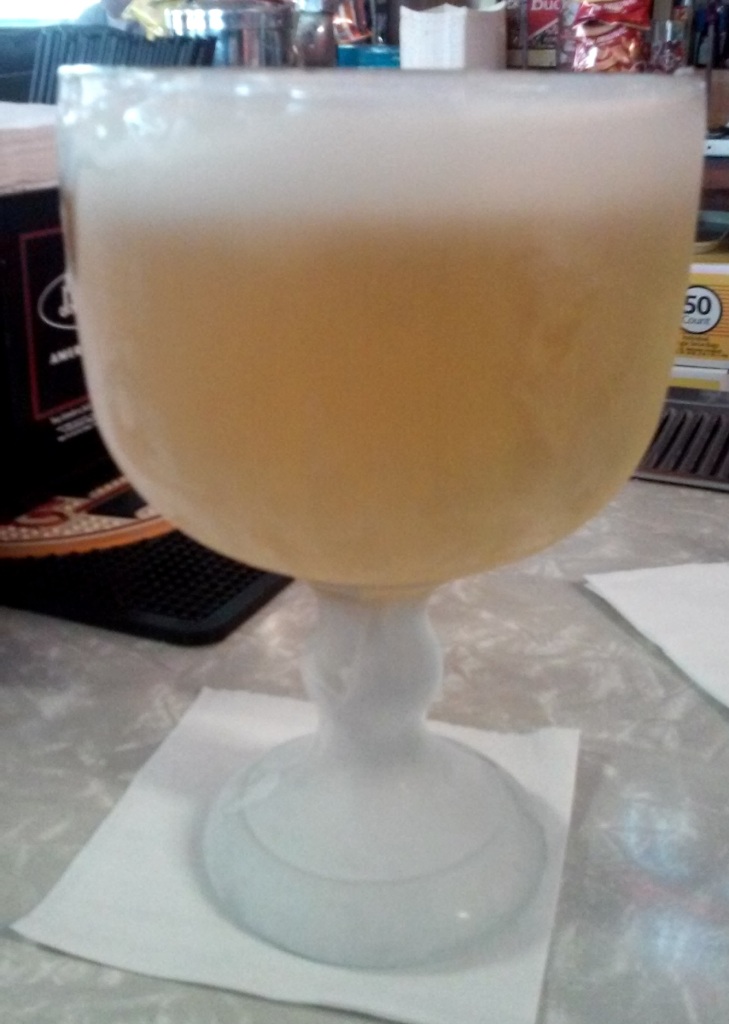 As for the “ambiance” it was as old-time as you would expect. No exposed ducts or art work. Just the usual beer distributor give a ways behind the bar.

Pat and I both opted for burgers. They do have a fish sandwich,but Pat forgot that,or didn’t notice so he ordered a double with fries. 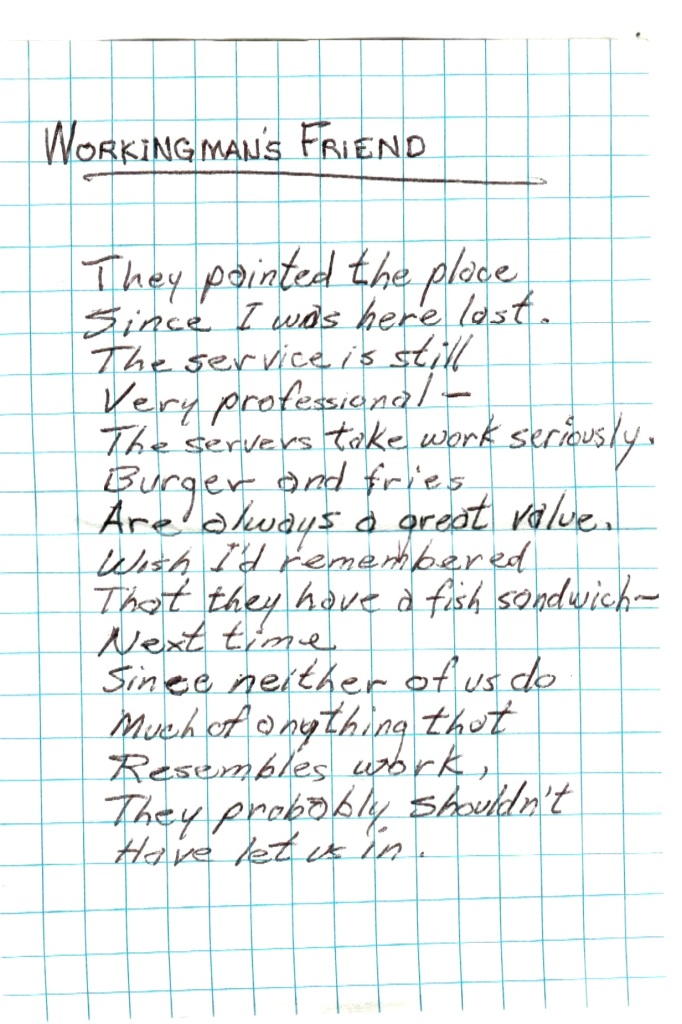 About their burgers. They are simply ground beef, nothing proprietary,just plain cow. They seem to be put up in 4 ounce patties and then smashed on a hot griddle. The seasoning is minimal;if at all. The appeal is the beefy crispness of the burger. The bun is a generic store bun but the overall flavor makes this an exceptional bite. They use shredded lettuce;which I do like, even though I opted for just onion and pickle. For the double they give a middle bun;like a Big Mac. But you can get it without. 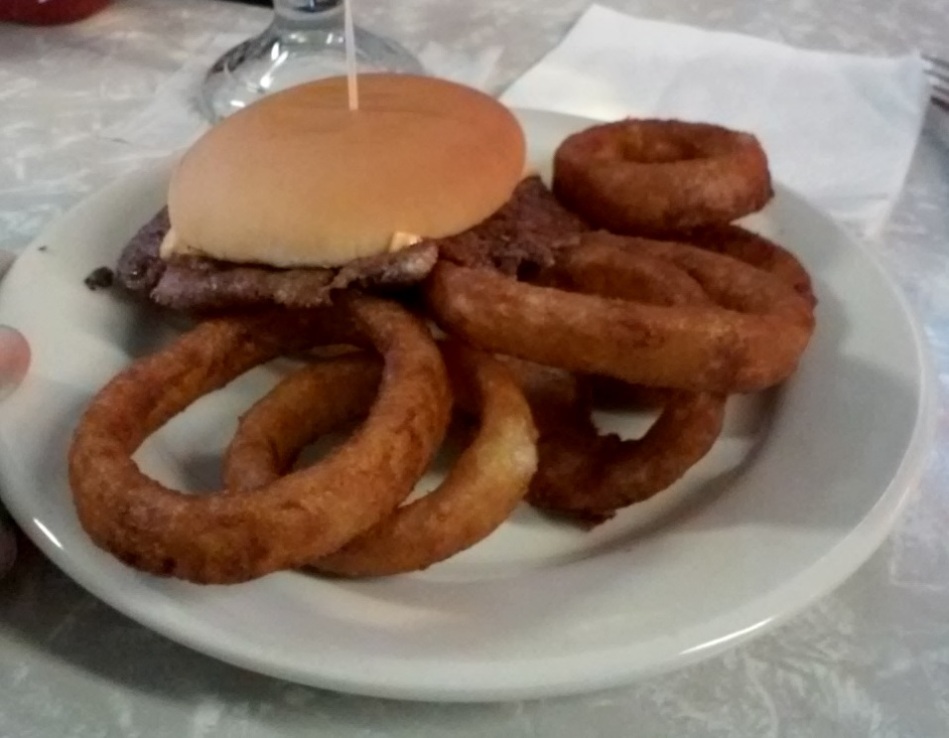 My single was crispy and tasty. There is always a danger that a smashed burger can be dry. But if they are done with the proper amount of attention and brought out in time that is not an issue. Pat opted for fries but I decided on onion rings. These are beer battered and fried and are delicious. 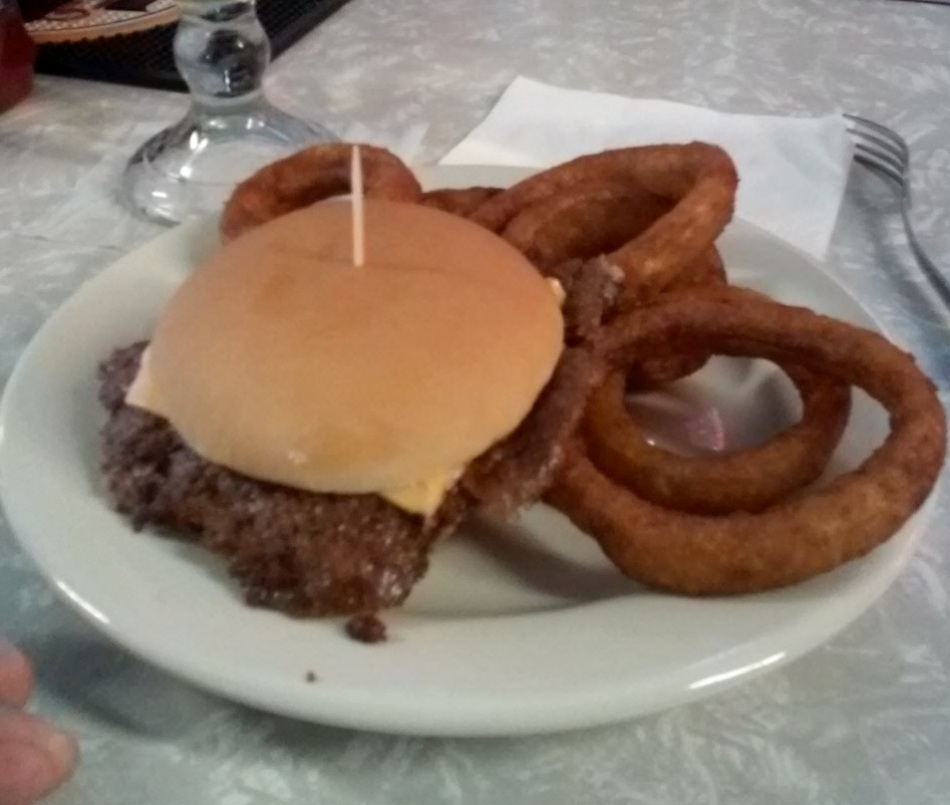 I was very impressed with the rings. I know they are the bane of Pat’s existence but if you aren’t allergic a good battered onion ring is a wonder. So if you want to wander into an Old School lunch room then by all means try this one. They are open from 11 to 5 and only take cash.