There are two Thai Towns on the westside. One on South High School Road and this. The newest. It is a very spacious and good looking joint.

It was a chilly day and Pat and I both ordered Thai Ginger tea. It was served to us with our first course. The first course was an excellent Thom Yum soup and a spring roll. The soup was excellent. Sparse on veggies but abundant in depth of flavor. It had a slight heat to it, which brought a warmth. The spring rolls are made in house and have onion in them so Pat gave me his. I thought they were wonderful. They reminded me of something I used to eat from an A&P Deli many years ago.

I also must add the the tea was delicious. My usual tea samplings have been limited to a more pedestrian variety so the Thai Ginger tea was quite a treat.

I followed Pat with an order of a red curry with medium heat. It was very good. A nice consistence level of heat punctuated with a few veggies. I would have prefered more eggplant and less green beans but it was still a good dish. I couldn’t finish it all after my soup and two spring rolls.

All in all this was a very nice lunch with excellence service.and at a very good price. Our lunches were 8 bucks each. I will be back for the tea, spring rolls and soup. That would be a meal for me. 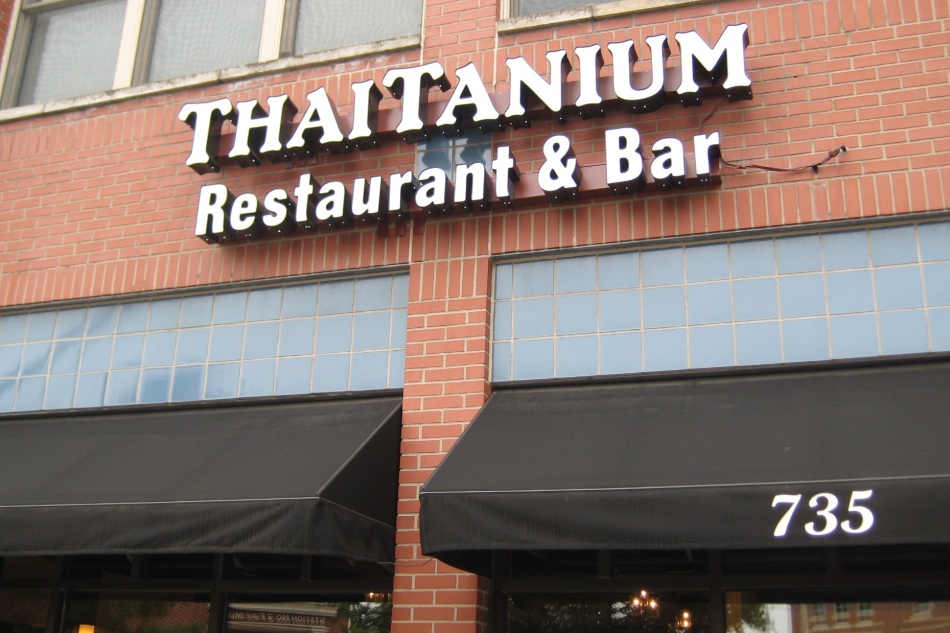 There is a fancy new Thai place on Mass. Ave. It’s a good-looking place with a clever name and better than average food. The offer several lunch specials for $8.99. Each one comes with soup, salad and a spring roll. 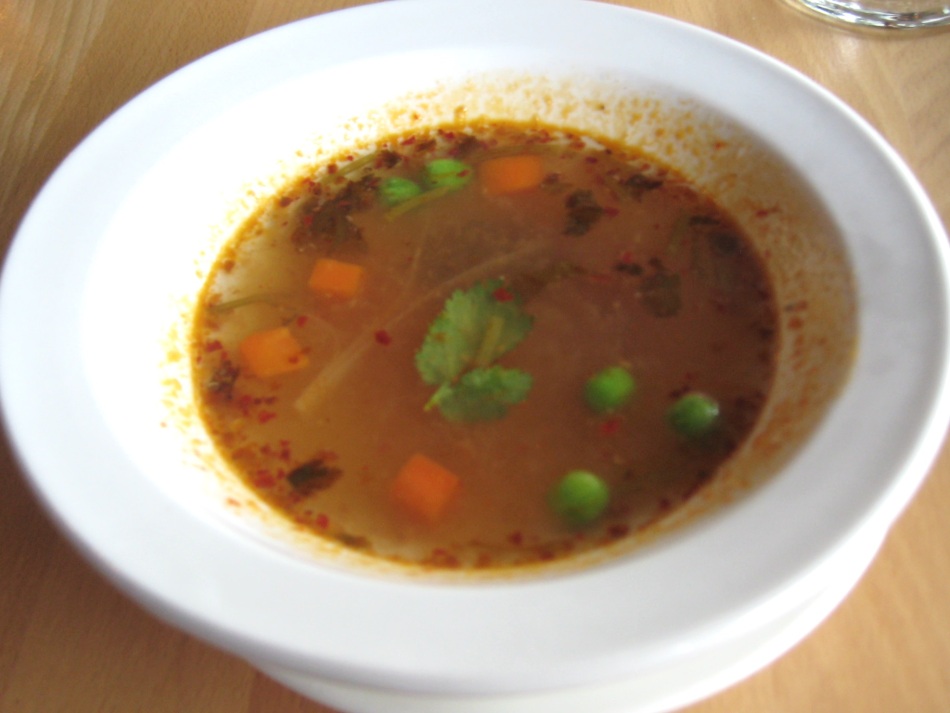 The soup is a nice broth with just a hint of spice. I could eat a couple of bowls of it. Minimal ingredients but the broth is the hook. 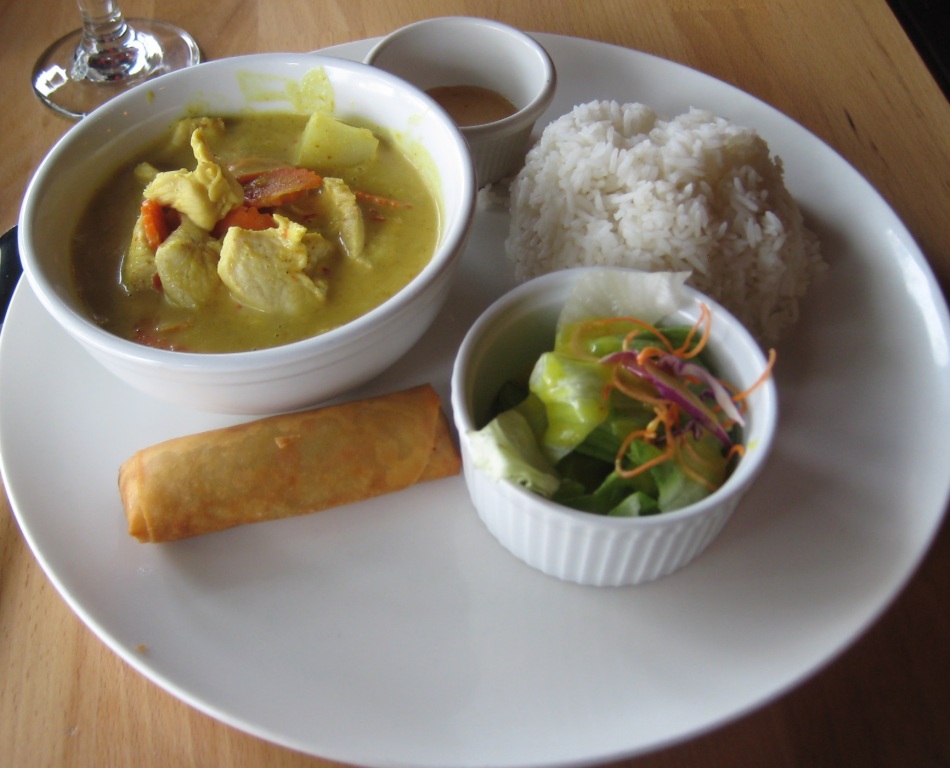 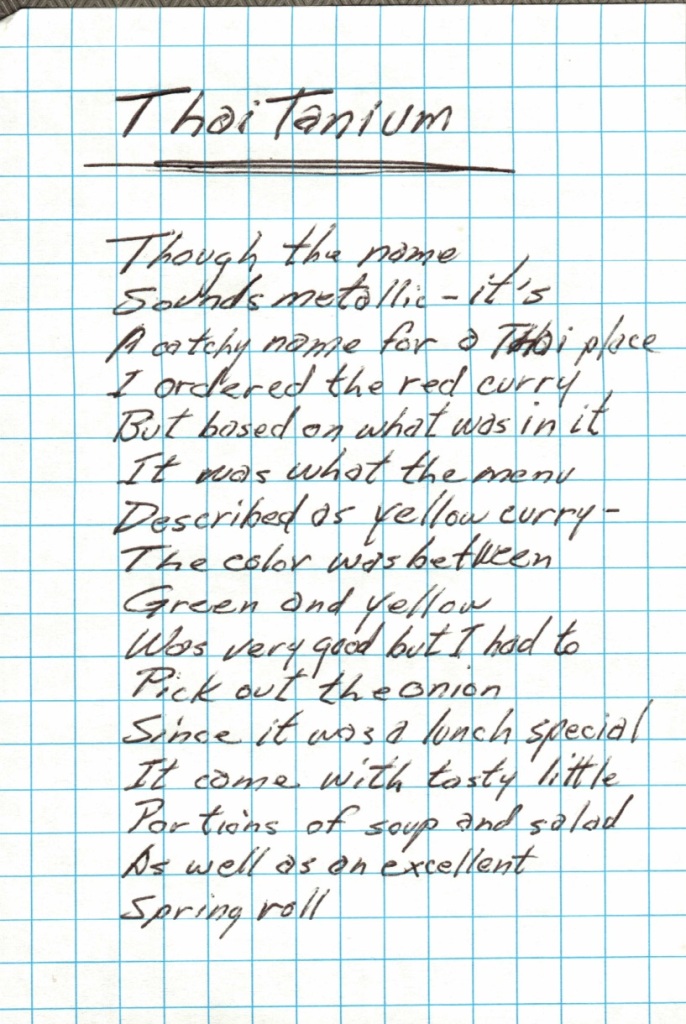 I ordered the Cashew Nut with pork. This is a stir fry dish loaded with peppers, mushrooms, water chestnuts as well as cashews. 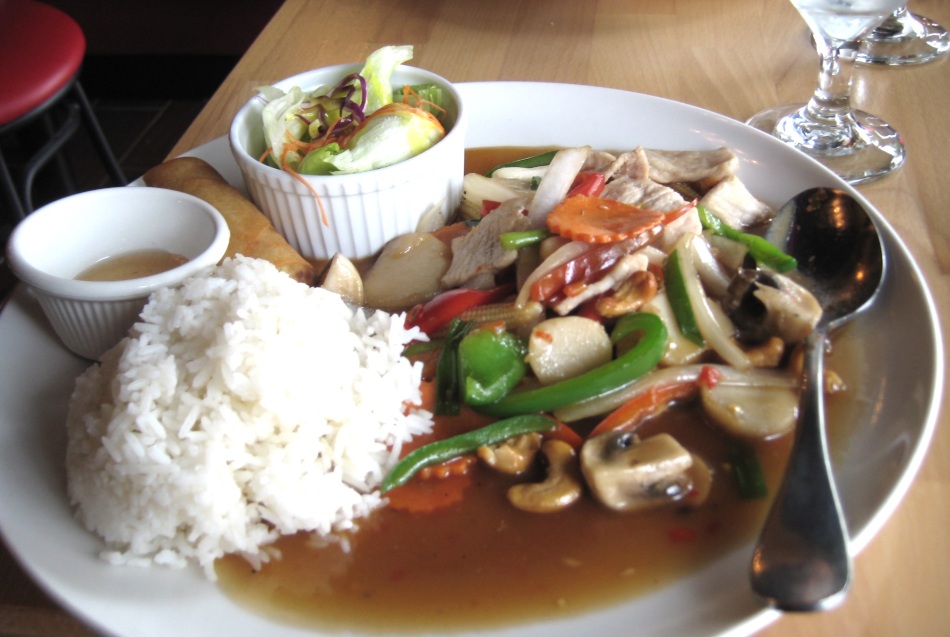 It was a huge plate full of food. The sauce was a simple brown gravy that matched up well with the pork and mushrooms. The small side of salad added just the right amount of crunch. As for the spring roll it was one of the best I have had and it wasn’t made in-house. It was full of cabbage with a delightful flaky skin. I would eat them again with gusto.

I hope this joint lasts longer than the previous inhabitant. I think it fits in well with the area.

There is something about rainy weather that makes Thai food compelling. Pat and I decided on Thai,again. Indy has a few Thai style restaurants available. For this occasion we decided on one in the “Village”. The address may seem familiar because it is the epicenter of what I call Ripple Food Central. That is a strip mall that houses several different ethnic eating options, as well as a brewery. Pretty convenient.

This particular joint has been around for a while but has changed owners. A few of the reviews have been less than complimentary concerning the owner and the service. I notice reviews, and I take them into consideration, up to a point. Bottom line I need to check out the joint first hand.

The place is compact, nicely appointed and neat and clean. Our first impression of the servers was they were competent and actually looking forward to waiting on us. After we were seated the first thing I noticed was their vaulted ceiling and this part of the decor. 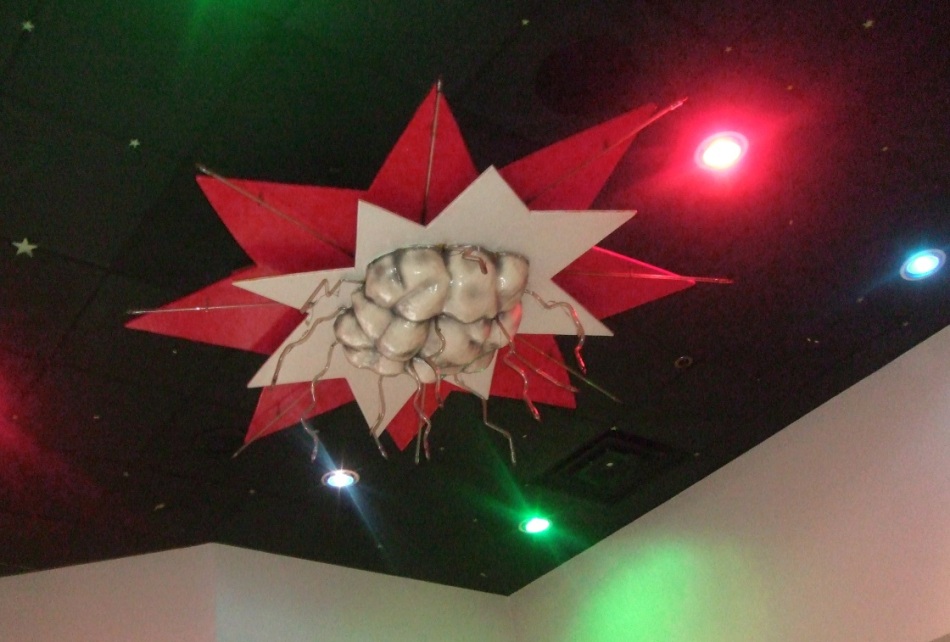 I have no idea what it is. I only hope it lights up at night, and possibly spins. Oh I hope it spins.

The first thing I noticed about this particular Thai restaurant was they offer Sushi. That is rare,in my experience. Oh one thing about this particular mall is that all the restaurants have a menu posted to the outside windows. You can see what to expect before you walk in. As much as I love Sushi I resisted. One of my all time favorite Sushi joints is about one block west. Besides to me Sushi without sake is like pizza without beer.

I really enjoy noodles. I really enjoy bean sprouts and veggies, so I ordered Khauk Swe Kyaw. Like all of their lunch specials they come with soup or salad choice for about 8 or 9 bucks. Pat and I both opted for the soup, lemon grass. 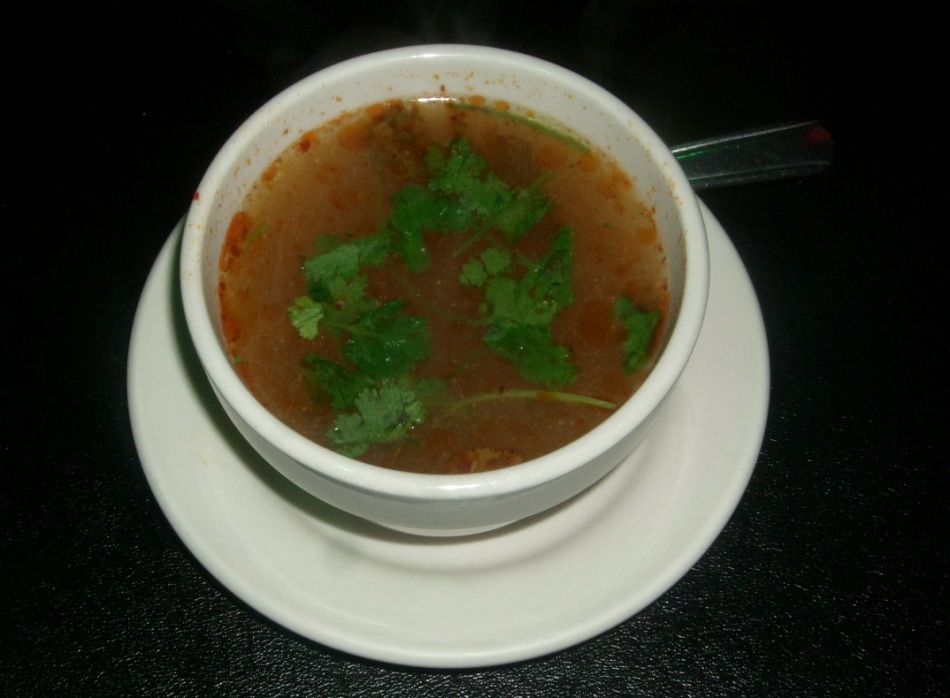 I have never had a Lemon Grass soup as assertive as this. Most often soups of this nature are flat and singularly flavored. A mild chicken broth with a weak citrus taste and a hint of cilantro. To me this cup was an explosion of lemon and chicken flavor and the cilantro was more than a passing herb, it brought its true taste to the forefront. I would venture a guess that this was due to the fat structure of the soup. You could taste it in the soup and fat is not only flavor it transfers flavor. So, yeah I dug the soup. 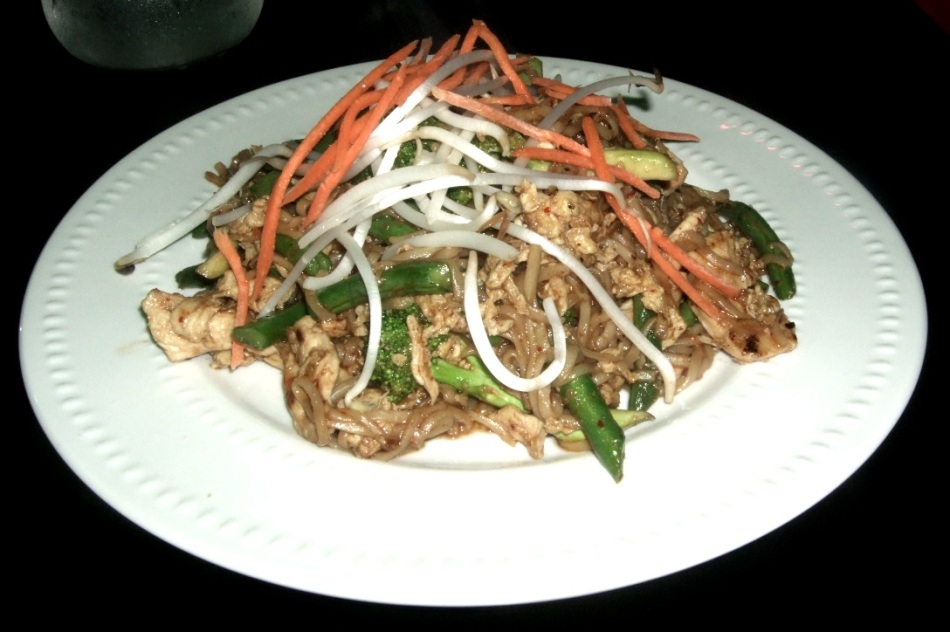 Now isn’t that a beautiful plate. An amazing abundance of veggies and chicken  with a nuance of peanut and topped with fresh carrot and mung sprouts. One of my favorite combos. 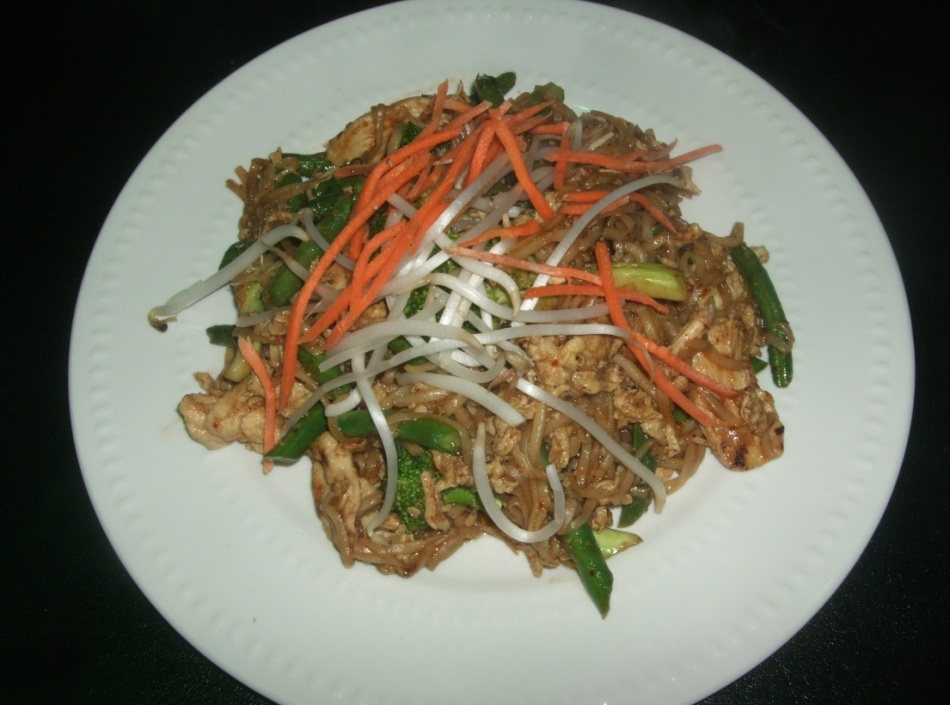 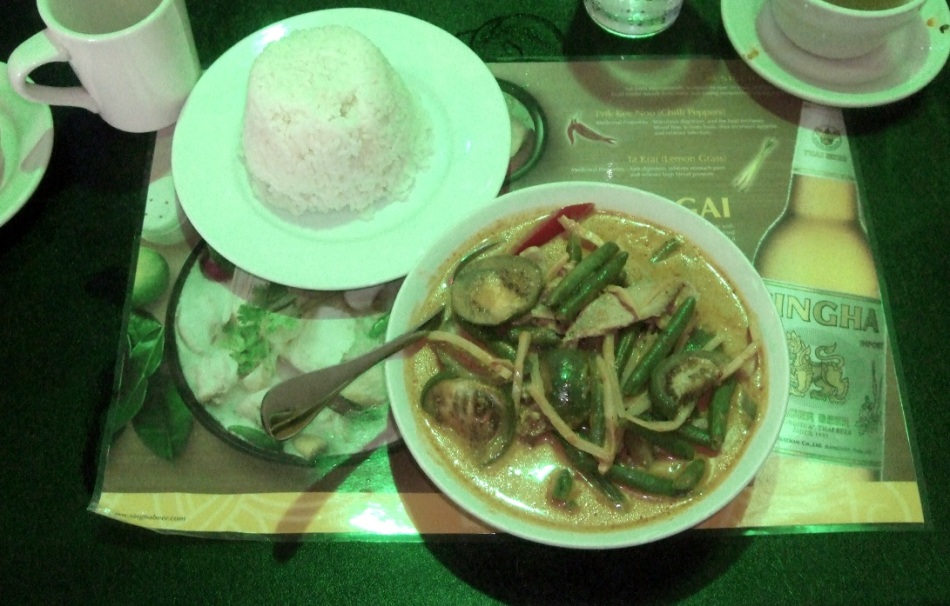 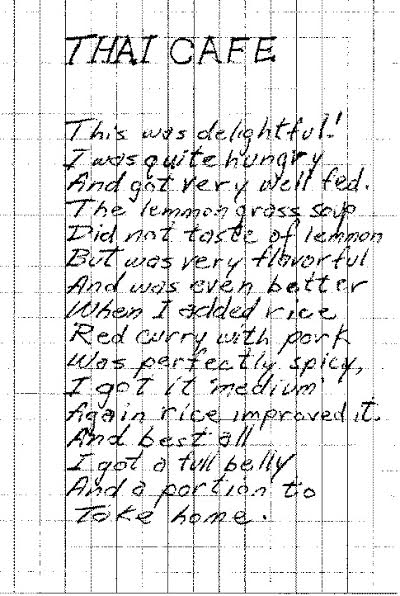 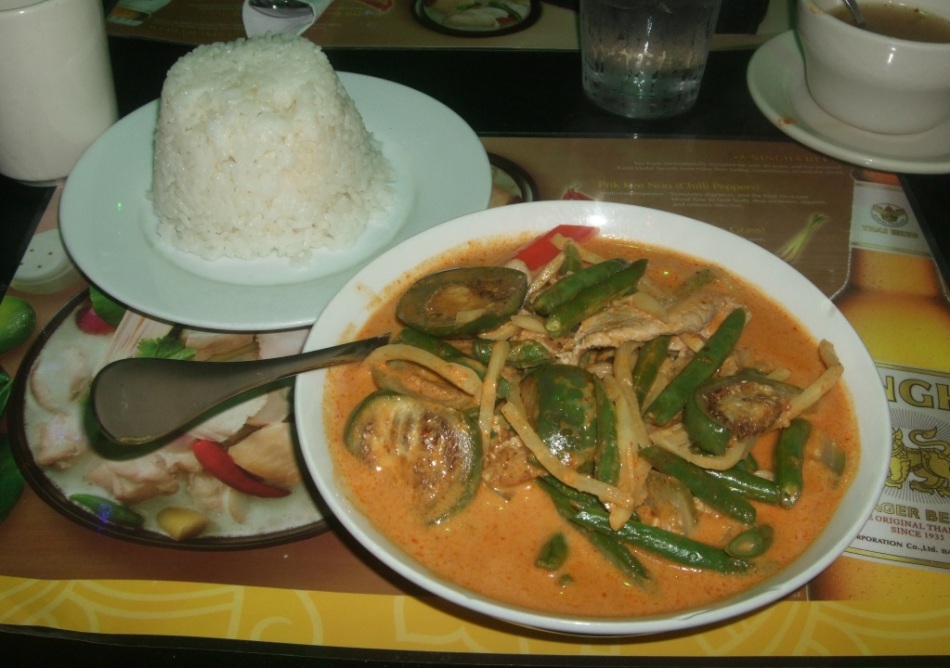 Now don’t ask me why the one photo had a green cast to it. I give my camera to Pat to take the shots of his own lunch and I have no idea what happened. I do think it’s sort of cool though.

Well regardless of the photos Pat and I are in agreement of this place. Even though we did have differing opinions of the soup. I think Pat was working on a cold. No matter we both think this joint is a keeper. So add this to your list of joints to eat at in the Ripple. 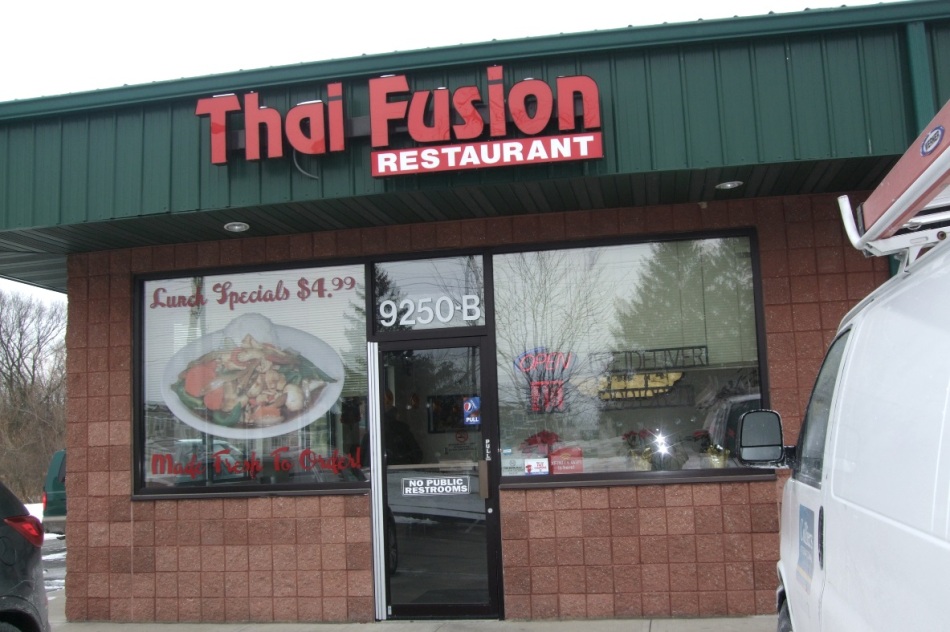 Last week after lunch we stopped at a little bar on West 16th street for a beer. There we met Dawn who told us about this joint. She was very excited about the place,so we had to check it out. The place is pretty small. It is located in a small commercial space next to same sort of movie rental place. According to Nellie, the owner that generates a bit of business for here. People order food and then go get a movie. Sounds like a plan to me. We had a nice talk with Nellie after lunch. She is a very charming woman. Knowledgeable and cordial. And she is comfortable with her own food so she is more than happy to suggest other Thai food spots. 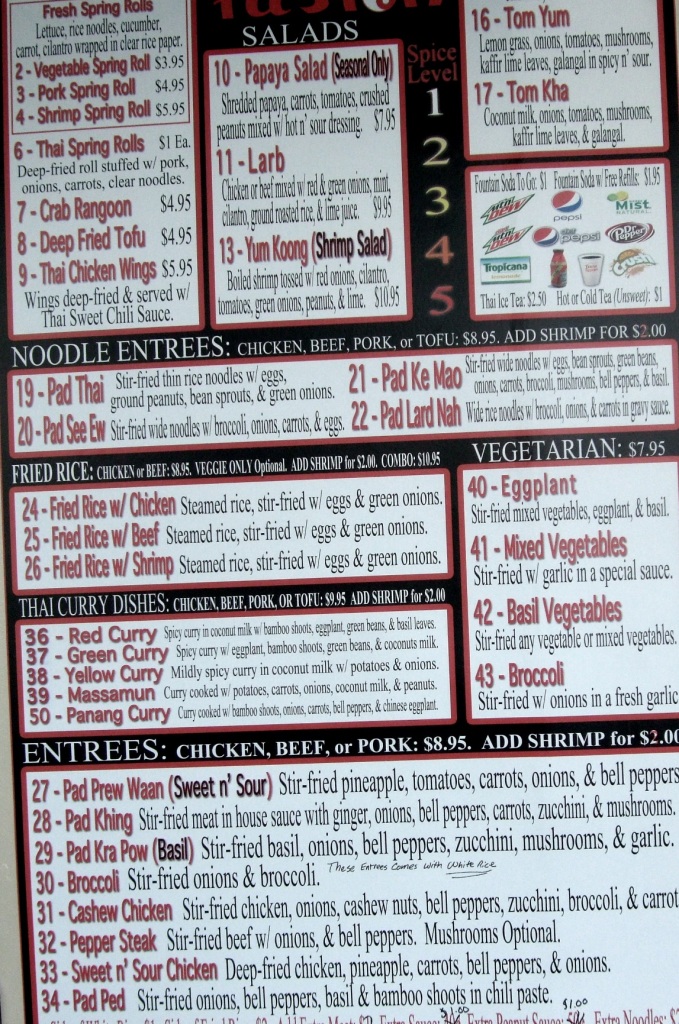 They have the menu on the wall, which is always convenient. They also have selected items as $4.95 lunch specials. We decided on the big board menu. First we ordered a vegetable spring roll for $3.95 and deep-fried tofu for $4.95. 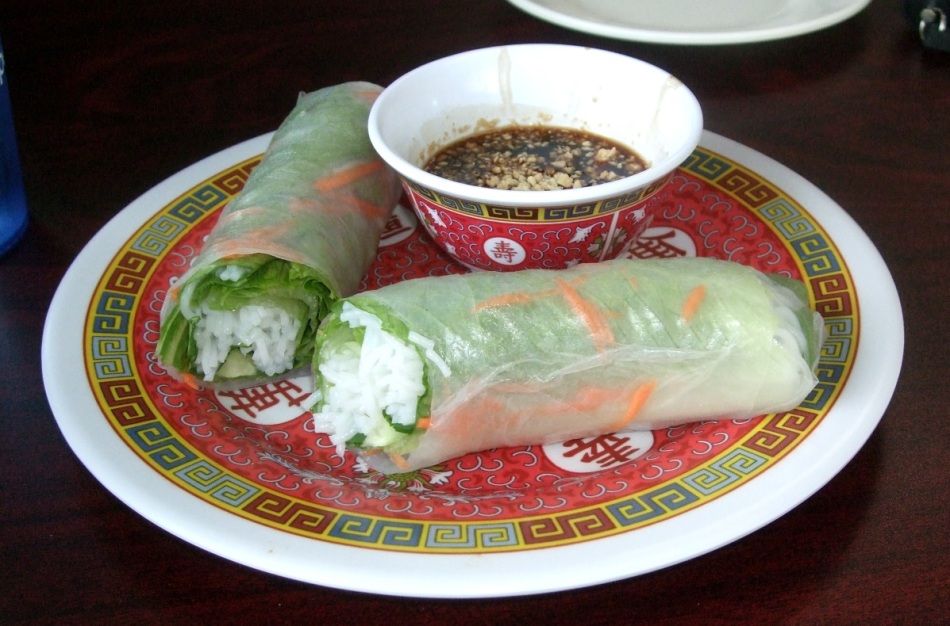 The Spring roll was huge. Even cutting it in half gave us 2 pieces easily 5 inches long. Possibly because it was so long but it didn’t seem to be wrapped as tightly as others I have tried. Of course that in no way detracted from the taste and the freshness of the roll. It was very nice and the sauce served with it was outstanding. A sauce like this is served with a lot of rolls I have tried,however this seem to be a cut or two above the others. 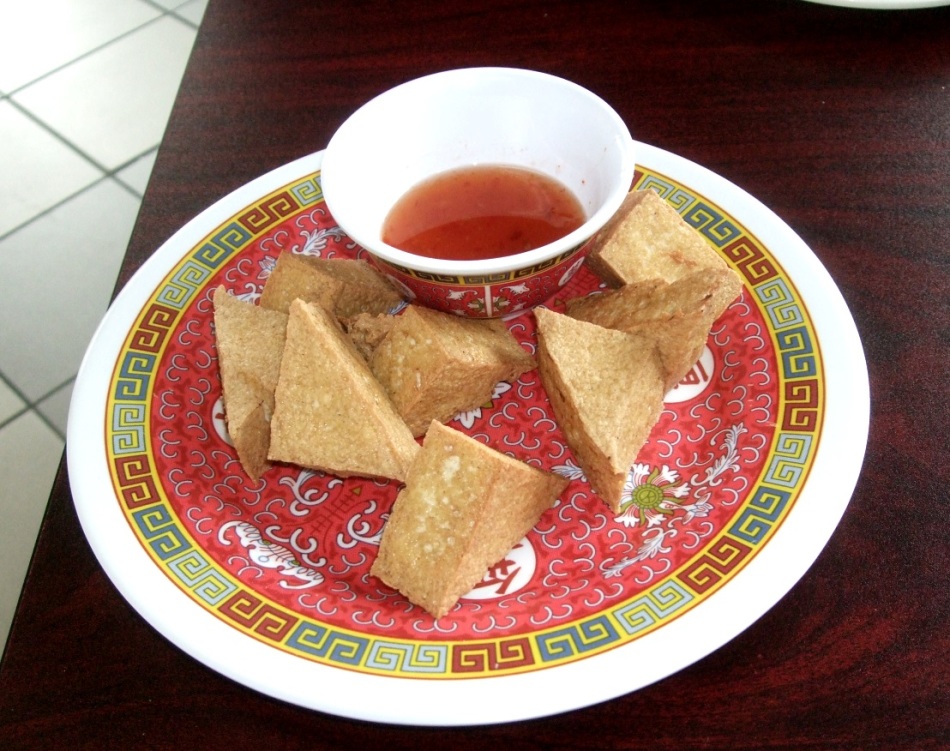 I am not a big fan of tofu. I must admit that I enjoy cooking with it though. I liked the creaminess of the inside, it just had very little flavor of it’s own. But it was a nice contrast of texture. 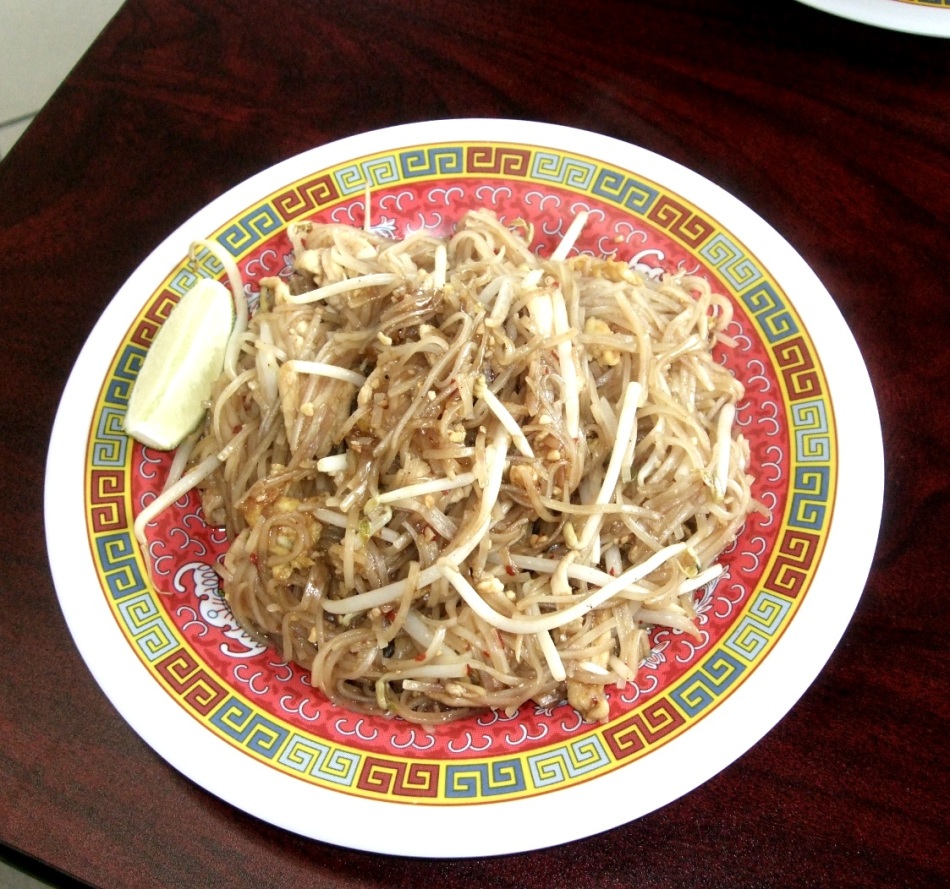 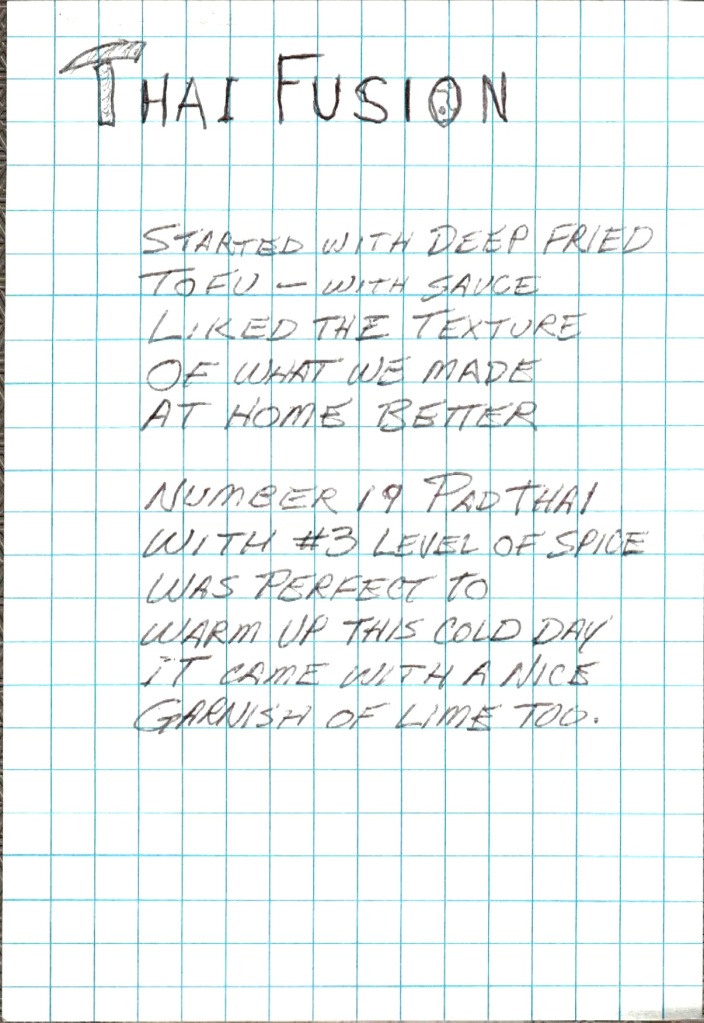 Pat was more concise today than normal. I know he is a big fan of fried tofu, since it is a common item on his house menus. I just don’t have the requisite knowledge to compare the 2 different textures. So now I am curious about the difference.

I was compelled by the pineapple and bell pepper listed in the ingredients of the Pad Prew Waan. It is a type of sweet and sour using a sweet chile as a sweetening agent. It was good. A great array of texture,with a spicy sweetness that slowly increases in heat that you have a nice buzz on the tongue. And it came with white rice. 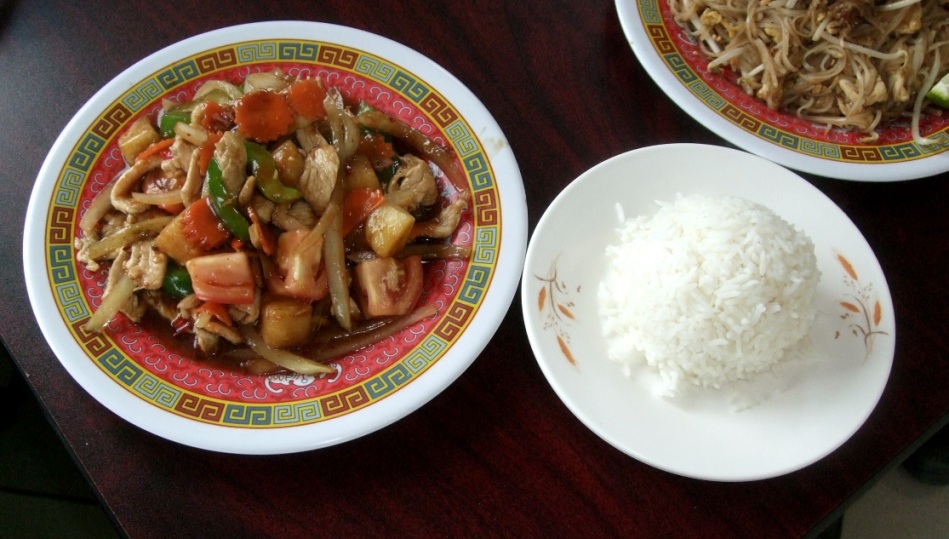 What a splendid lunch for $8.95. Of course the tomatoes were your typical winter variety, not fully ripe. This didn’t really effect the overall dish, just an observation. 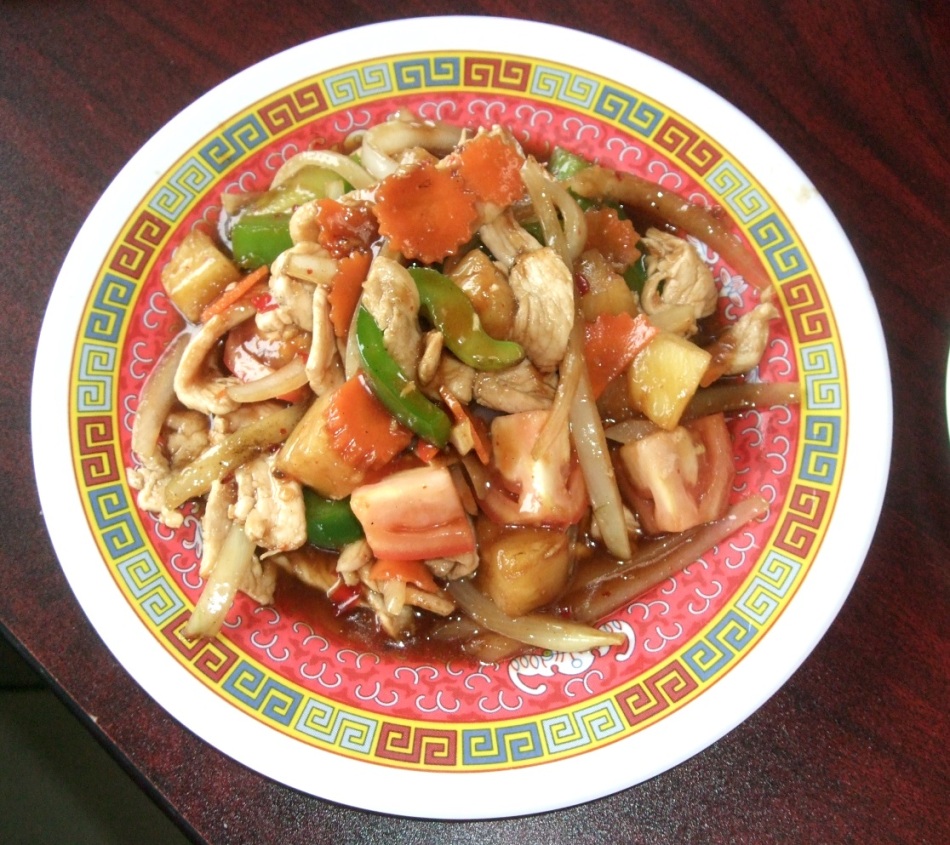 So now all the folks on the West side can get their Thai fix. And at an excellent place,too. So Nellie thanks again for the food and good luck to you. 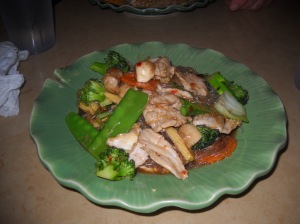 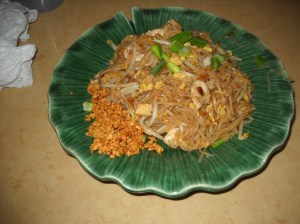 We finally made it to Thai Spice, we wanted to go there for quite some time but something always interfered. It is located on S. County Line Rd.right across the street from Greenwood Shopping Center.Thai food is one of my favorite “ethnic ” foods;I just don;t eat it very often,because I’ve become wee bit of a sissy when it comes to spicy.Pat and I both order our dishes medium;which worked out real well.They offer approximately a dozen lunch specials all for $7.98. Each special comes with a cup of lemon grass soup;a veggie egg roll and a won ton wrapped fried banana with simple syrup.

To me egg rolls are all texture; from the fried crunch of the outer wrapper to the veggie crunch of the interior cabbage.They are almost always good and are a perfect appetizer;and this roll was no exception.The surprise was the banana;think plantain in a blanket;a little sweetness is always good at the start of the meal.As for the soup it was sophisticated in its humility and delicious.A simple broth a little savory,a little spicy with bits of tomato and tiny button mushrooms floating in it;if that don’t amuse your bouche;your bouche must be broken.

Now to our main plates.Pat ordered Padd Won Sen,Bean thread noodle with veggies and your choice of protein.Neither one of us had the foggiest idea what bean thread noodles are;and we still don’t;yet.I opted for the more ubiquitous Padd Thai with pork,I really dig rice noodles with sprouts,and they tossed in some dried baby shrimp and ground peanuts for laughs.Pat’s dish was a lot prettier than mine;with all the broccoli;pea pods and baby corn. But the flavor profiles were much the same;spicy and sweet,and the portions were more than generous.But just when you thought no mas you got your second stomach into the act and you were able to finish the plate.I’ve never made a concerted effort to study the intricacies of “oriental ” cooking;I’m no stranger to the basics but I would like to keep the nuances of Thai food mysterious and exotic.And as long as the result is as delicious as Thai Spice I won’t care at all how they do it.