Okay. Normally our lunch day is Thursday. Pat decided that we would go “rogue” today and hit some joint that we would never normally consider. I decided to hit a joint I have noticed on the “net” that is located in Brightwood. This is a working class neighborhood that some folks call the hood. I grew up in that neighborhood. So actually I was rather excited to check out the new Brightwood.

The building has been around for a long time. For years it was called the Bungalow. A joint noted for its catfish dinners and bar service. I had been there a few times 35 years ago. My dad went there on a few occasions. Actually I forgot about it until I saw an entry on Urbanspoon. From what I recently discovered the Sawmill has been opened for quite a while. It was named after the veneer factory across the street. That particular factory has been around since I was a kid. 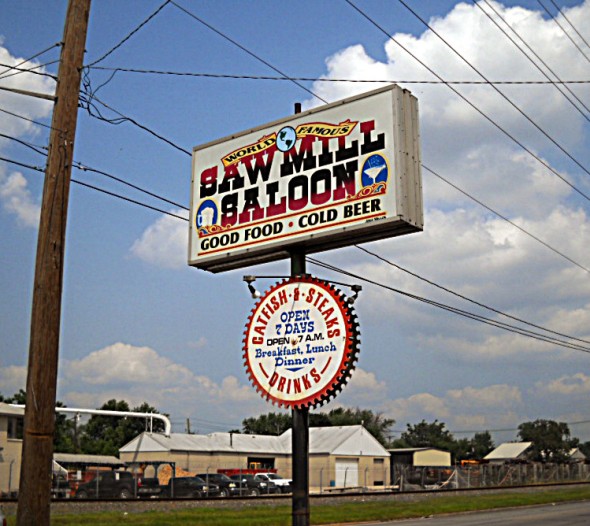 The joint has not changed much in the last few years. A long bar, several tables and a rather cool back bar.

Their menu is unpretentious and very Hoosier. I didn’t bring my scanner so I was not able to present the menu. Now that is a bummer. I always pride myself on the fact that I can usually present a joint’s menu for everyone to see. This time my camera was not up to the task.

They make their own fries, and onion rings. They also hand cut and pound out the pork loins for breading. Normally I try to avoid breaded and fried food. I am supposed to eat a Heart Healthy diet. However, sometimes a man needs some fried meat.

Their version of the Hoosier staple was a great example of a simply good sandwich. It was not as intricate as some places. It was simply a nice hunk of pork that was hand pounded and breaded and fried. It wasn’t a great BT by any standard. It was a good one. It was tender. The breading was a little light. 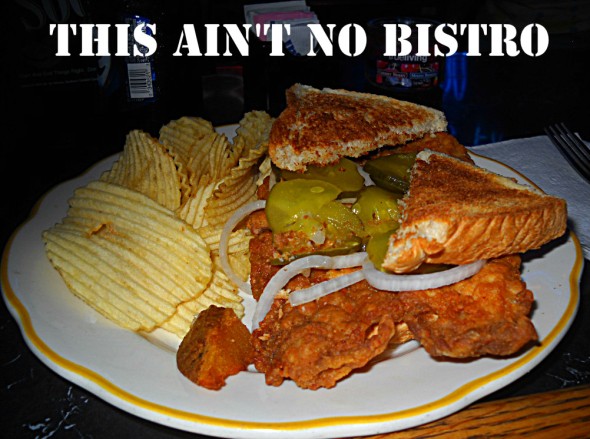 The fries were nice. They cut them in-house. I don’t think they double fry them. Which I think is how it should be. In either event they really should season the bad boys. Their fries are pretty good. They just need some cojones. One thing I enjoyed was that they put the tenderloin on toast. Not the obligatory Texas toast, on a flat top,but white bread toast from a toaster, I liked the crunch.

The previous day the Sawmill had a hog roast. So they ran their pulled pork sandwich as a lunch special.

I think I agree with Pat’s assessment. If I found myself in the neighborhood I would go again. However Brightwood is hardly a destination;anymore. The food is tasty,the beer is cold and the new owner; Rhonda is a delight. So should you find yourself on Sherman Drive by all means pop in. For two sandwiches and fries the tab came to under 14 bucks. And a domestic bottle will cost you $2.75. So I think it was a good afternoon in the neighborhood. 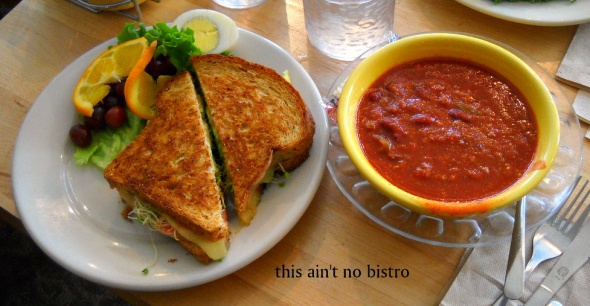 What a big name for a rather small place. Pat and I have been meaning to try this place for a while, don’t know why we haven’t until now. They have a pretty good format. They offer a wide variety of deli and sub sandwiches; grilled or cold. Pair that up with house made soups and chili and a plethora of different salads you have a joint with lunch written all over it. If you take that marriage and add a case displaying the most decadent looking cakes and pastries this side of Bavaria you have a brand. They even have a merchandise freezer offering a selection of their products you can take home. Well now that my cheer leader routine is over let’s talk about their food.

They have a category called grilled sandwiches that are all $9.40 and come with choice of soup,salad,chili or mac & cheese. I got a Havarti Delight. Havarti cheese,avocado,sprouts and tomato on wheat bread. It was a nicely prepared and tasty sandwich. Creamy cheese, double buttery from the avocado and the buttered toast with just the right touch of acidity from the  ‘mater. Had I to do it over again I would have added bacon. Bacon is always a nice addition. I did have a bowl of chili. I had to have some meat or else my stomach would have thought I was angry with it. The chili was pretty good better than most; not as good as some. Pat had his usual default lunch; grilled cheese. It had an interesting choice of cheeses. Provolone,jack and Colby on what appeared to be sourdough bread. It was satisfactory. However Pat got a little miffed when he learned ,after the fact, he should have been offered bread choice and an option to add 2 veggies from a list of 4 . I guess he should have read the menu board. He opted for salad with oil and vinegar. Has the manufacture of oil and vinegar cruets been suspended? Once again the oil and vinegar was served in portion cups. OK end of rant. After lunch Pat had a chocolate glazed donut. I had a bite and it was really good. Trouble is it cost $1.67. As Patrick so sagely pointed out it was no better than Longs and for that price he could have gotten 3 donuts. I think you better leave your sweet tooth at home when you stop here for lunch.