I’m talking about opinions. Opinions as in reviews, specifically restaurant reviews. I read quite a few reviews in the course of determining which joint Pat and I should visit. Reviews have been a part of food preparation since the first person started cooking for strangers. Back when I was in my “prime”, so to speak, reviews were common place. They just weren’t as abundant as they are now. Once only newspapers and magazines took the trouble to send someone to an eatery just to eat the food and write about it. Now with the increase of cable TV we have different food networks,complete with recipe shows and cooking competitions. That might be the reason there is such a surge in the number of new restaurants opening.

Furthermore with the advent of the PC has come Yelp and Urbanspoon. Now every one is a Restaurant Critic. Remember the old saw: “Those who can’t do, teach”? Well I amended it to “Those who can’t do,teach,and those who can’t teach critique.” That is where I am now. As a chef/cook I was also a teacher. They both go hand in hand. As a kitchen head it is your responsibility to create the menu, establish recipes and procedures and to teach everyone who works with you every thing you can. The more the individuals learn the more valuable they become and the more time you can spend on other things. Now that I no longer have a commercial kitchen I can play in I get my kicks vicariously by writing about the food.

In addition to the “like” reviews I also read the “do not like ” reviews as well. These can be just as helpful as the positive ones; maybe more. I pay close attention to the dates as well. If a joint hasn’t been written about in a while it may mean that word of mouth has out paced the reviews. Or it might just mean the “blush is off the rose” and that particular joint is not as “hip” as it used to be. People can be fickle. Another thing I pay attention to is what I call the “geology” of the restaurant. Some places that have been around for a while will have “layers” of differing opinions. At first the reviews are positive for a year or so and then they change to negative. If they stay negative I will usually avoid the place. If the joint rebounds and wins the public over again that means that whatever happened has been rectified. In which case it could be a winner. In all cases the reviews are opinions of 1 or 2 people and damn few joints can be flawless at all times. I like to consider a bunch of the positive and negative posts in order to get the feel if the joints has off days or if it just isn’t very good.

One more thing I find funny is some of the reasons given for the negative comments. The woman who complained about  having trouble figuring which door to use to enter. Or the party that came in 5 minutes before closing and griped about the food they were out of. No joint wants to run out of menu items,but sometimes demand is higher than normal on certain items. And restaurants are always adjusting pars; sometimes just too late. For the most part people are nice. But some folks really aren’t. My personal biggest gripe are the newly relocated people; usually from Chicago; who complain that Indianapolis Restaurants are not Chicago Restaurants. Really. You moved for a reason didn’t you? I am sure some big nasty old Hoosier Hillbilly didn’t drive up to Chi-Town, hog tie you and bring you back in his pick-up truck. Some one in your family or Company picked Indy for a reason. I am sure it wasn’t a conspiracy just to deny you dining pleasure.

So not only is it fun to eat out it is fun to write and read about it. I hope everyone takes advantage of both Yelp and Urbanspoon and plans a dinner date or a family night out. And I hope everyone enjoys their food.

Well; Pat and I have gotten a couple of good recommendations about this joint. We had planned on going last week. And then we decided on doing some shooting so we ended up on the other side of town. In the interim I gave what information I could to Urbanspoon so they could add it to their base. That is why I am not real happy about what I have to report.

This joint is fine. Located in a strip mall at 45th& Shadeland Ave. The food isn’t bad; it is just that there are “Soul food” joints that do it so much better.

The menu isn’t too big. Which is fine. They offer 3 different varieties of fried fish and the usual home-made sides. They do have specials; but we didn’t see the dry erase board until after we had ordered. Pat ordered a pork chop dinner. That came with 2 sides and corn bread for $ 9.

Well being the meat loaf groupie that I am that is what I ordered. A dinner with mac& cheese and greens. Again $9. 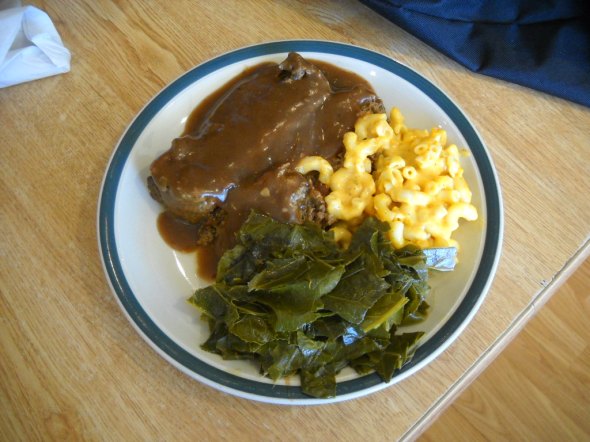 The meat loaf had a nice compaction but the flavor was hard to determine. The whole portion was covered with an excessive amount of gravy. I spent most of my thoughts while eating trying to figure out the where I might have tasted the gravy before. I realized that it tasted like TV dinner gravy. Sorry; but although it might be “tasty” it ain’t real cooking. As for the greens. OK but I am the kind of guy that thinks greens need more than a couple of hours cook time to be greens. The mac and cheese, well it was macaroni in canned cheese sauce. OK only in a pinch. So now we go to the cornbread. Better to call it a sweet corn cake, from a mix.

So all I can add is this joint,like all joints has potential. Give them a chance. Small business is the life blood of our country. Oh and if the chef is reading this you might wanna’ try more baking and less deep-frying. I know I am probably out of line, but as long as I used to do this stuff. The boy can’t help it. 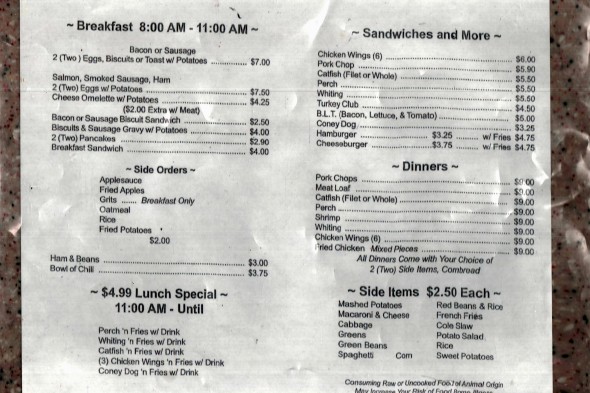