Some time back Pat and I made a small tour of Wanamaker eating at Extraordinary Pizza and Wheatley’s. We had heard of The Ordinary but never got around to going there. Last week our server at Rebar  made a pitch for us to give it a try. He is a night-time cook there and told us they offered more than pizza.

I am not sure how old the building is but the floor looks ancient. The dining area is a comfortable size and the menu is of a reasonable length featuring all the foods you would expect of a Hoosier tavern.

Pat decided on an individual pizza for $6.50 with 2 bread sticks. 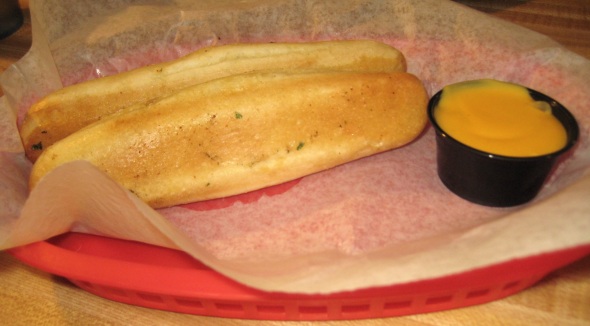 The bread sticks are fashioned from their pizza dough and are first-rate. They come with a generic canned nacho cheese sauce for dipping. 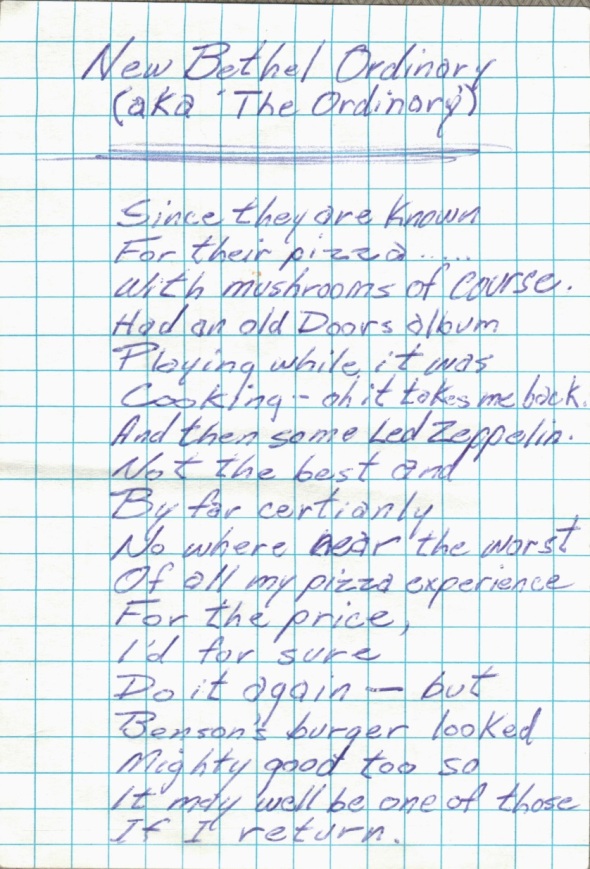 The first thing I noticed on the menu is the prices. They are very reasonable. All of their sandwiches come with waffle fries and one other side. I wanted a burger. Their basic burger is a half pound Angus for $7.95. I decided on the Texas BBQ Burger for $8.95. It comes with bacon, cheddar cheese, an onion ring and of course BBQ sauce.

It was a pretty good burger cooked on a griddle. I did order it mid-rare but it came out more medium. I think I may start ordering my burgers rare. Never the less it was a good bite. The bacon was freshly fried and the bun was nicely toasted. I would order one of their burgers again.

My other side dish was homemade potato salad.

It was a very good potato salad. Small pieces of potato that were almost of a mashed consistency. Not what I am accustomed to but still nice.

I like Wanamaker. In some ways that stretch of Southeastern Ave reminds me of a short stretch of Route 66 that is the main drag for Moriarty New Mexico. A whole bunch of restaurants and bars in a short piece of road. The Ordinary has some pretty good food with excellent prices and it is close to Indianapolis so I think it is worth a visit.

Southeast of Indianapolis is Wanamaker.It’s a community,founded in 1836, that has the charm and appeal of a small town. That is where we decided to have our Grand Adventure. First stop was Wanamaker Guns. It’s a small shop in a mini strip mall. They have a great inventory of old guns. Black powder long guns, old Springfield rifles and hand guns;and a  plethora of military related models. They also have a nice supply of accessories. As a matter of fact I got a sweet deal on an Uncle Mikes holster; 6 bucks less than current list price. The reason we stopped there first was that it was on the way to Xtraordinary

Pizza. The first thing I noticed about the place was the tableau right next door. It was a little wooden shack covered with old metal signs complete with a gas pump and an old tow truck. It even had its own intersection, with street signs and a Dog ‘N’ Suds drive in sign. My pictures of the little scene don’t even come close to doing it justice. Inside it looked the way a small town Pizza shop should look. Tables and chairs and signs celebrating the local High School,no fancy or fictitious ambiance,just utilitarian function. You ordered at a counter,open to the kitchen,sat down and the cook ( one of the owners ) brought it to you when ready. The pie you get is what you would expect from such a no frill joint. A big tasty no nonsense proletarian pie loaded with toppings. We ordered a 10 inch sausage and mushroom,and the amount of each was almost embarrassing. The crust was thin and crispy, but not brittle. It had a texture more reminiscent of a thin shortbread. Crisp to the tooth,yet sturdy enough to handle the load. It is definitely a pie I would like again. Our 10 inch gave us 8 big slices,so big we couldn’t eat it all. And how much was it? You ask. About 15 bucks,with 2 sodas. After lunch we headed down the street to Brewskies,for ,well some brews. Again the feeling of small town friendly. It may sound trite, but we felt right at home as soon as we walked in. A lot of the reason for that was everyone in the joint ,help included, was closer to our age than most places in the city. AND, for 4 draft beers ( one Killian and three Silver Bullets ) the bill was $9. I can’t remember the last time I ran into so many truly nice people; people who didn’t owe me money. So a tip of the proverbial hat to Wanamaker Indiana. We’ll be back.